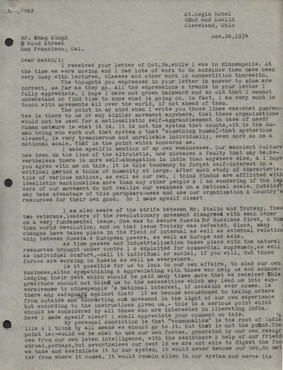 DESCRIPTION
Letter from Bhagwan Singh Gyanee to Bhag Singh dated November 26, 1934. Gyanee mentions that he is responding to a letter from Singh dated October 26. In the letter, Gyanee covers a range of topics: the strife between Joseph Stalin and Trotsky, the role of "communalism" in India, and the political situations in Japan and China.

I received your letter of Oct. 26 while I was in Minneapolis. At the time we were moving and I had lots of work to do andsince then have been very busy with lectures, classes and other work in connectition therewith.

The thoughts you expressed in your letter in answer to mine are correct, as far as they go. All the expressions & trends in your letter I fully appreciate. I hope I have not grown backward and so old that I cannot understand or find time to know what is going on. In fact, I am very much in touch with movements all over the world, if not ahead of them.

The point in my mind when I wrote you those lines was: what guarantee is there to us or any similar movement anywhere, that these organizations would not be used for a nationalistic self-aggrandisement in case of need? Human nature is what it is. It is not the system that counts, -it is the human being who work out that system & that “something human”, -that mysterious element, is very treacherous and unreliable individually, even more so on a national acale. THAT is the point which concerns me.

I made specific mention of my own weaknesses. Our ancient culture has been on the line of the altruistis, how mistaken & faulty that may be. Nevertheless there is more self-abnegation in India than anywhere else, & I hope you agree with me on this. It is this tendency to forget self-interest in a critical period & think of humanity at large. After much study of characteristics of various nations, as well as our own, I think Hindus are afflicted with idealistic emotionalism more than any other people & I an wondering if the leaders of our movement do not realize our weakness on a National scale. Outsiders may take advantage of this parupkark-ness and use our organization & Country’s resources for their own good. Do I make myself clear?

I am also aware of the strife between Mr. Stalin and Trotsky. Thes two veterans, leaders of the revolutionary movement disagreed with each other on a very fundamental issue. One was to secure Russia for Russians first, & the then world revolution; and on that issue Trotsky was defeated. Since, many changes have taken place in the field of internal as well as external relationship between Russia & European powers, as well as Europe and Asia.

As time passes and industrialization takes place with the natural resources brought under contro l & exploited for commercial supremacy, as well as individual comfort, -call it individual or social, if you will, but those forces are working in Russia as well as everywhere.

Is it possible for us to look to our own affairs, to mind our own business, altho sympathizing & appreciating with those who help us and acknowledging their debt which should be paid many times more that we receive? This gratitude should not blind us to the necessities which may lead us into subversivenee to otherpeople's national interest, if occasion ever comes. Is there any safeguard against that? If we become accustomed to taking orders from outside and not conducting our movement in the light of our own experience but according to the instructions given us, -this is a serious point which should be considered by all those who are interested in liberating India. Have I made myself clear? I shall appreciate your comment on this.

My personal conviction is that “communalism” is the root of India's ills & I think by all means we should go to it. But that is not the point. The point is: -would we be abel to use our own forces, generated by our own resources from our own laten intelligence, with the assistance & help of our friends abroad, perhaps, but nevertheless our own? Id we are not able to digest the foo we take and assimilate it to our system, it would never become our own, no matter from where it comes. It would remain alien in our system and serve its its own ends and not ours. THIS is the POINT I wrote you about.

The rest of the comments in your letter are appreciated and require no answer. I shall be glad to receive any literature or any book to clarify my ideas, but I do not believe that I have gone backward since I have left Gadar Party, -I have gone ahead. However, there are details which a person cannot have unless one is in the workday & night. I realized on that account that information for correct judgment is lacking. But the point I raised was not of any particular nature. It is so outstanding and glaring that it does not require any particular intelligence to see it, even.

I have noticed the Country's tendency towards the left & I rejoice with you that it is coming to a sound, sensible program, -the only program which will liberate the masses of India. My heartfelt sympathy is with you on that account & I am willing to go with you to the maximum, -not halfway, but to the fullest.

Concerning Japan, I think your remarks are just, but on the other hand Japanese are Japanese & they have to look to their own national interest first. They are not altruistic as we are & we will have to give them credit for their intelligence and patriotism, in spite of the disadvantages & drawbacks which they have to fight against, owing to the predominant influence of the European nations around Japan & all worthwhile territory occupied either by Russia or England. Japan cannot kill her younger generations because all the adjoining territory is occupied by some Nation which does not belong to them.

I wonder if you are aware that Siberia with 2,200,000 sq.miles was taken away from China by the Czar & ia so sparsely populated that Russia will not be able to populate it in the next 500 years? The same thing istrue of Australia. How is Japan to get out of such a tight pinch? We have to appreciate their behavior in the realm of international politics. Japan alone can challenge the superior haughtiness of the Western World and give inspiration to the rest of the Orient. We should take Japan for what it she isworth and not develop needless antagonism against her.

Manchuria she is taking away from Chins? No, it was under the domination of Russia's influence from the time of the Chino-Japanese war. Not admiring imperialistic designs, if there are any, but admiring Japan's courage. Surrounded by nothing but poverty & rocks, with sheer intelligence & wil power she has built up a modern Nation which challenges the imagination of even the haughtiest nation in Europe. Japan has her purpose, her ideal. Under present condition she cannot attack Australia or New Zealand, nor can she fight against America. The only possible way for her expansion & raw material, to combat western imperialism lies in Manchuria, where Russia's influence is merely political. R

Russia does not nee Manchuria for her existence, but Japan does. These sentimental sympathies should not blind us to the need of other nations Manchuria is too close a neighbor. To protect her own self-respect & independence, she could not afford to let any great power entrench herself on the soil of China. What Japan is doing NOW she should have done in 1914, -slapped China on both sides of the face & made her behave. If Japan had done that, perhaps China would have established an orderly system and progressed a little, instead of spending all her money and resources on killing each other.

As far as Japan's conquest of China is concerned, she may conquer but cannot hold her. China is too big. By occupying China, Japan will antagonize the whole Orient as well as Europe & America, & to-day no nation can survive in defiance to the rest of the world as a whole. Germany tried & faileed. Japan knows it well. She learns her lessons beautifully.

I wish it were possible for us to spend a few hours together & exchange these ideas. When we come towars wht West again, we shall do so.

With best wishes and Bande Mataram, I remain