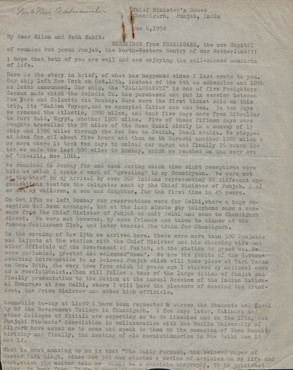 DESCRIPTION
Letter from Bhagwan Singh Gyanee to Ellen and J.G. Watumull, dated December 6, 1958. In the letter, Gyanee discusses his whereabouts since he left New York that October, and the greetings he received in Bombay and Chandigarh. Gyanee also mentions that "The Daily Parkash" (sic) has published a series of articles on his life.

My dear Ellen and Seth Sahib:

GREETINGS from CHANDIGARH, the new Capitol of wounded but proud Punjab, the North-Western Sentry of our Motherland!!!

I hope that both of you are well and are enjoying the well-earned comforts of life.

Here is the story in brief, of what has happened since I last wrote to you. Our ship left New York on Oct.12th, instead of the 6th as schedules and 10th as later announced. Our ship, the “JALALDHARATI” is one of five Freighters German made which the Scindia Co. has purchased and put in service between New York and Calcutta via Bombay. Ours were the first ticket sold on this trip, its “Maiden Voyage, and we occupied Cabins one and two. In ten days we crossed the Atlantic, 3200 miles, and took five days more from Gibraltar to Port Said, Egypt, another 1900 miles. Five of these fifteen days were roughWe travelled the 98 miles of the Suez Canal slowly in a convoy of 15 ship and 1300 miles through the Red Sea to Jeddah, Saudi Arabia. We stopped at Aden for oil about five hours and then on th Karachi another 1300 miles o or more where it took two days to unload our cargo and finally 36 hours later we made the last 500 miles to Bombay, which we reached on the very eve of “Diwalli, Nov 10th.

We remained in Bombay for one week during which time eight receptions were held at which I spoke a word of “greeting” to my Countrymen. We were met at the wharf on my arrival by over 200 Indians representing 20 different organizations besides the delegates sent by the Chief Minister of Punjab. I also met my children, a son and daughter, for the first time in 45 years.

On Oct 17th we left Bombay our reservations were for Delhi,where a huge reception had been arranged, but at the last minute by telephone came a message from the Chief Minister of Punjab to omit Delhi and come to Chandigarh direct. We were met however, by some friends and taken to dinner at the famous Parliament Club, and later boarded the train for Chandigarh.

On the morning of Nov 19th we arrived here. There were more than 500 Punjabis and Rajputs at the station with the Chief Minister and his charming wife and other Officials of the Government of Punjab, at the station to greet us. We were garlanded, greeted and welcomed”home”. We are the guests of the Govern-awaiting introduction to my Beloved Punjab which will take place at Tarn Taran on Dec. 24th, the very town from which 52 years ago I started my national work as a revolutionist..Then will follow a tour of the large cities of Punjab and finally presentation to the Nation at the Annual Session of the Indian National Congress at New Delhi, where I will have the pleasure of meeting the President, the Prime Minister and other high officials.

Meanwhile to-day at 11:30 I have been requested to address the Students and Faculty of the Government College in Chandigarh. A few days later, Mahindra and other Colleges of Patiala are expecting me to do likewise and on the 12th, the Punjabi Students’ Association in collaboration with the Muslim University of Aligarh have asked me to come and speak to them on the occasion of Guru Nanakas birthday and finally, the meeting of old revolutionaries in New Delhi Dec 13 and 14.

What is most amazing to me is that “The Daily Parkaah, the beloved paper of Master Tara Singh, since Dec 3rd has started a series of articles on my life and work,which the editor told me would be a complete biography, to be published later in book form >

later in book for. It is a revelation to me that the humble effort I put for forth are so well and so widely known and appreciated by my grateful Nation.

Since the news of my arrival has
appeared in the press, there is a nation wide publicity and old friends and a stream of people I have never met or known are constantly finding their way here…I presume after the Tarn Taran mass meeting where twenty-five to thirty thousand are expected to attend, it will increas XXXX the demand for my appearance, many fold.

Your contribution that made my returning home possible and which we both imagined a fitting tribute to an old philosopher seated in a rocking-chair,chanting old mantrams, and talking to himself, is turning out to be a wrestling match with difficult problems!... I saw myself active, but in the field of education preparing the younger generation to find the solutions to present and future problems…but not politics.

As you well know, I am not a politician, and still hope that my usefulness to Indiamay be through other and different channels, But the indications on the horizon at this moment plus the dire need of the country are challenging my innate sense of Patriotism and loyalty to India. And this, if you please, in spite of my own thinking. What a lesson for those who think they can live their own life as they please, or who are theiseters of their own destinies. How frustrating this must be to an inflated ego and how grateful I am to my Hindu heritage that teaches “Thine is the privilege and right alone to work, never to the fruits thereof.”-Gita

So yousee my friend, by doing what you did, not “expecting any reward thereof” has set me to work within my own capacity and sphere to do”What I must and needs to be done” without even being offered the freedom of choice. Such is the pattern of this Universe in which we live. So, in the unity of purpose which we are both serving I send you both personal greeting and a “Happy New Year”
Sincerely always,-