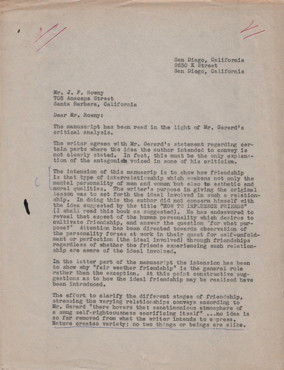 DESCRIPTION
Letter from Bhagwan Singh Gyanee to J.F. Rowny, regarding a book manuscript on the subject of friendship.

The manuscript has been read in the light of Mr. Gerard's critical analysis.

The writer agrees with Mr. Gerard's statement regarding certain parts where the idea the author intended to convey is not clearly stated. In fact, this must be the only explanation of the antagonism voiced in some of his criticism.

The intension of this manuscrip is to show how friendship is that type of interrelationship which awakens not only the mental personality of men and women but also the esthetic and moral qualities. The writer's purpose in giving the original lesson was to set forth the ideal involved in such a relationship. In doing this the author did not concern himself with the idea suggested by the title "HOW TO INFLUENCE FRIENDS" (I shall read this book as suggested). He has endeavored to reveal that aspect of the human personality which desires to cultivate friendship, and answer the question "for what purpose?" Attention has been directed towards observation of the personality forces at work in their quest for self-unfoldment or perfection (the ideal involved) through friendships regardless of whether the friends experiencing such relationship are aware of the ideal involved.

In the latter part of the manuscript the intension has been to show why "fair weather friendship" is the general rule rather than the exception. At this point constructive suggestions as to how the ideal friendship may be realized have been introduced.

The effort to clarify the different stages of friendship, stressing the varying relationships conveys according to Mr. Gerard "there hovers that sanctimonious atmosphere of a smug self-righteousness sacrificing itself" ...no idea is so far removed from what the writer intends to express. Nature creates variety; no two things or beings are alike.

Friendship, on the other hand, is an effort on the part of two or more individuals to remove the rough edges of their separate tendencies and, through mutual gifts (consciously or unconsciously bestowed) or exchange of values, attain the closer identity involved in genuine friendship. Evidently the idea is not clearly stated. But at present no better way of illustrating the points involved comes to mind. Perhaps Mr. Gerard can suggest a better term by which to designate the relationships indicated by "superior" and "inferior", "elder" and "younger"/ or "guru" and "chela". The thought should be clarified but the ideal involved must not be lost. Repetition should be eliminated.

We shall leave here June 2. We can arrange to stop in Santa Barbara, instead of going up North. We can devote three evenings a week to public lectures. This will enable us to unite our former students and attract new scholars for the Summer Session. At the same time we shall be in Santa Barbara to make the necessary preparations for the summer series, and talk with you regarding the present manuscript. By that date you shall know what suggestions Mr. Gerard has to offer in changing the wording in those places to which he objected.

Please let me know what you think about lectures in Santa Barbara during June.

With every good wish to you and your coworkers, I am