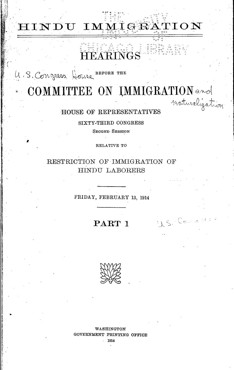 The hearing includes three statements, the first by Sudhindra Bose, the second by R.F. Patterson, and the third by Anthony Caminetti

Bose begins the hearings by narrating an anecdote, in which a government official had claimed that “the Hindus are the most undesirable people in the world.” Throughout the hearing, Bose contests the common objections to Hindu immigration on labor and racial grounds. Patterson, in her statement, indicates that her husband was consul general in Calcutta, where they lived for ten years. Patterson defends Hindus as a people, presenting an altogether idealistic image and relating anecdotes of boarders and servants in Calcutta. Commissioner General of Immigration Anthony Caminetti argues for some measure prohibiting Hindu laborers to the U.S., claiming that the argument presented by Bose is possibly about a different class and race of people than that who are entering the Pacific coast.

The final part of the document contains a report submitted by Caminetti with documents about immigration law in Canada, including 1) reports from Canadian deputy minister of labor on immigration from India; 2) extracts from the Canadian immigration act of 1910; 3) summary of restrictive laws and regulations of certain British colonies relating to immigration; 4) a report on the distribution of hookworm infection; 5) table showing arrivals, exclusions, deportations, and departures of Hindus compiled from records in the Bureau of Immigration