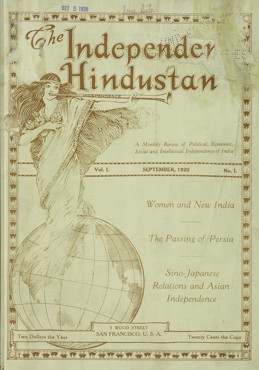 DESCRIPTION
First published in September 1920, The Independent Hindustan (Vol. 1, No. 1) was the official Hindustan Gadar Party organ, and would be later reincarnated as The United States of India in 1923. Much of the layout is the same including the image of “Mother India” on the cover. Surendra Karr served as editor, and Bishan Singh served as Business Manager. The global reach of the publication is suggested by the yearly subscription pricing: “Two Dollars in the United States, Mexico and Shanghai.”

The opening editorial expresses the publication’s aims: “Actuated by a definite, determined and deliberate purpose, we are before you to interpret and inform concerning revolutionary and progressive spirit which is guiding the destiny of India.” The following editorials and essays are published in this issue:

• “Irish Revolt in India”
• “Rousing the British Public”
• “Paving the Path to Palestine”
• “Obituary for Bala Gangadhar Tilak”
• “Cablegram Threatens Safety of the British Empire”
• “Solidarity Through Khilafat”
• “The Passing of Persia” by Surendra Karr
• “Sino-Japanese Relations” by Taraknath Das
• “Women and New India” by Agnes Smedley
• “India. A Poem” by M. Elizabeth deLacy
• “Plight of Indian Labor in Fiji”
• “National Debt of India”
• “Free India from English Pirates – Plea of an Australian” by Arthur Thomson

The issue published a photo of the late Bala Gangadhar Tilak for his obituary, a photo of Lila Singh for the article on “Women and New India,” and a disturbing image of Persian nationalists hanged by the British Government to accompany the “Passing of Persia” article. The back pages include advertisements for The Independent Hindustan, “Invincible India” by Edward Gammons, “British Terror in India” by Surendra Karr, and a full-page spread for the Friends of Freedom for India.