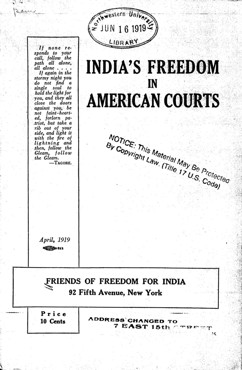 DESCRIPTION
Published by the Friends of Freedom for India, "India's Freedom in American Courts" was a pamphlet that described court cases in which Indian anti-imperialists and other allies in the U.S. were put on trial for violating "neutrality laws," and threatened with deportation. The case involved Ghadar activists Sailendranath Ghose, Taraknath Das, Bhagwan Singh, as well as Agnes Smedley, Mr. and Mrs. W.A. Wotherspoon, and Bluma Kraus. Ghose and Smedley were arrested in New York on March 6, 1918, while the others were arrested in San Francisco. The defendants were indicted for violations of the Espionage Act, approved by Congress, June 15, 1917, under the charge that they "falsely acted as representatives of a 'foreign government' (meaning the Indian Nationalist Party, a political body in India), without prior notification to the Secretatry of State." A second charge against the defendants involved their publishing a book titled Isolation of Japan in World Politics by an Asiatic statesman, which suggests that "Japan's duty is to repudiate the Anglo-Japanese Alliance in case of a revolution in India." The pamphlet also goes into greater detail about the case against Taraknath Das, as well as Gopal Singh, a young "Hindu revolutionist," who was convicted in April 1918 for violation of neutrality laws. The pamphlet urges readers to write to Secretary Wilson of the Department of Labor to protest these actions.