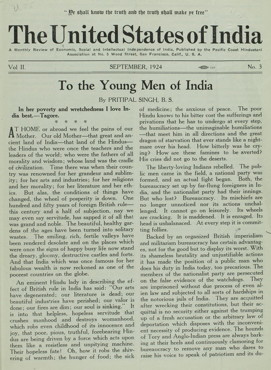 The United States of India (September 1924)

DESCRIPTION
The September 1924 issue of the United States of India (Vol. 2, No. 3) published from the former Gadar headquarters on No. 5 Wood Street, San Francisco featured the following articles: "To the Young Men of India" by Pritipal Singh, which describes the author's "ideal of Swaraj"; "The Defeat of Mahatma Gandhi" by Jack Carney offers a critique of Gandhi's Swarajist policies, calling for industrial development and "the power to dictate" rather than simply "disobey"; "President De Valera's Warning to Other Struggling Nations," in which the Sinn Fein leader cautions other anti-colonial movements against moderates; and "The 'Christian' Deception," a reprint of a publication by an unnamed Indian in Kenya, which contests white supremacy. The issue also contains a list of 42 "Indian Exiles in Foreign Lands," focusing primarily on anti-colonial Indian dissidents in Germany, America, Turkey, and France.