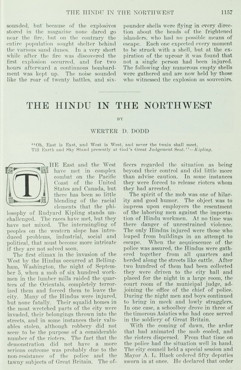 DESCRIPTION
Article from World Today (Vol. 13, 1907) by Bellingham Herald newspaper editor Werter D. Dodd (1871-1959) describing the events, cause, and effect of the Bellingham Riot: "A mob of six hundred workmen in the lumber mills raided the quarters of the Orientals, completely terrorized them and forced them to leave the city. Many of the Hindus were injured, but none fatally. Their squalid homes in the most wretched parts of the city were invaded, their belongings thrown into the streets, and in some instances their valuables stolen." Dodd explains the mood of the mob curiously, as "one of hilarity and good humor." Within two days of the riot, Dodd continues, the "Hindus" were completely gone, despite assurances by Bellingham mayor A.L. Black and mill owners that they would receive protection and could continue working. According to Dodd, before the riot, there were about 400 Hindus in Bellingham, and several hundred in neighboring towns. The article describes a similar riot occurring a few days later in Vancouver, B.C., organized by the "Japanese-Korean Exclusion League," which lasted several days and targeted the Japanese and Chinese. Dodd explains that while the methods of these mob actions have not been supported by the press, labor organizations or employers, the effect has been largely successful as demonstrated by an earlier riot in Bellingham against the Chinese, which dramatically reduced the Chinese population in the town. The Bellingham Anti-Hindu riot was not racially motivated, as was the case for the Chinese and Japanese, Dodd continues, given that the Hindu is an "Aryan, not a black as frequently characterized in the press." Rather, the cause was "industrial" and the Hindu "fills a place." The article concludes with a discussion of plans by the Exclusion League to put the Japanese "out of business" through a boycott campaign in Puget Sound. Contains five photographs captioned as follows: "Bellingham Hindus Discussing the Situation with the Special Deputies," "Some of the Hindus Driven from the United States to Canada," "Hindus on Their Way to the Mill To Draw Their Pay," "In Strange Surroundings," "The Two Hundred Hindu Prisoners." Three of the photos in this article first appeared in the Bellingham Herald, while two were also published in Collier's Weekly the same year.